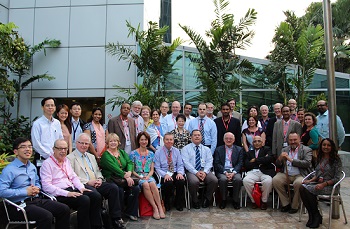 The IAPB Board of Trustees met in Singapore on 28-29 March for their first meeting of 2014. The meeting began with the formal approval of new members (listed below) and appointment of new trustees (Prof. Hugh Taylor, incoming President of ICO, Dr. Alamuddin, of IAPB-EMR, Dr. Astrid Bonfield, as the representative of the Queen Elizabeth Diamond Jubilee Trust, and Dr. Neil Murray of RANZCO).

Peter Ackland gave the CEO report, in which he highlighted the development of an infographic and short video (which all members are encouraged to use) to support advocacy for the Global Action Plan. He also talked about progress in attracting interest from the Qatari Government to fund pediatric eye care in South East Asia and trachoma elimination in the Eastern Mediterranean (initiatives respectively led by Orbis and the EMR Trachoma Alliance).

The Global Action Plan (GAP) was high on the agenda with several discussions addressing the key question of how IAPB can effectively play a role in eliciting in-country implementation. Themes ranged from the opportunity to ensure resources were directed where impact was greater, to the necessity of not overlooking regions and countries that may have been neglected in the past, to the type of activities that could function as catalyst for national roll-out (conducting prevalence surveys and health systems assessments, developing national plans and building national coalitions for eye health were highlighted as key initiatives).

Recommendations were also put to the board to ensure consistency of messages and alignment of purpose between VISION 2020 and GAP, the two successive global initiatives for the elimination of avoidable blindness and vision impairment. These were to ensure that references to the former, still a powerful brand in many regions, would be in line with IAPB’s current focus on the latter.

The theme and call to action for World Sight Day 2014, falling this year on 9 October, were also presented: the rolling theme of ‘Universal Eye Health’, in line with the focus of the new Global Action Plan, continued, with the call to action being ‘No more Avoidable Blindness’ – this would allow organisations to focus on disease areas relevant to them by customising the call to, for example, ‘No more Cataract’ or ‘No more Trachoma’. Supporting WSD material would be produced and circulated in the summer – click here for details.

Johannes Trimmel, IAPB Vice President and Chair of the Post-2015 Work Group, reported on progress to ensure eye health was in a position to benefit from the current work on a renewed global development framework past the Millennium Development Goals 2015 deadline. He discussed how linkages with disability and broader health networks provided promising entry points for eye health.

A large part of the meeting was dedicated to discussing the ongoing membership and governance review. Richard Bennett, the consultant leading the review, reported on the results of the consultation in which members were asked about four different scenarios for IAPB’s membership and governance models. The responses pointed towards a desire for some degree of change, particularly to increase members’ engagement and ownership, and foster transparency of processes and decision-making. The board discussed at length a few key aspects such as the role of the board and its composition, ways to balance participation and engagement in governance with effective decision-making, the role of regional chairs and fee structures.

The open and constructive discussion was welcomed by all and enabled the consultant to start work on narrowing down options for a second consultation of the membership, to be held in summer. A more detailed account of the findings of the first consultation, as well as of the process going forward, will be circulated to all members separately.

The Board also approved the 2013 Financial Statements and Trustees’ Report – these will soon be available on our website. It is worth noting that, once again, the auditors returned a clean bill of health, sign of the excellent work undertaken by the finance team led by Blandine Labry.

The dates for the 10th General Assembly (10GA) were also announced – the quadrennial key gathering for the eye health community will take place on 18-20 September 2016 in Durban, South Africa. A team from the London office will be leading a first recce visit to Durban in May.

Finally, IAPB staff and board would like to thank the Singapore Eye Research Institute for hosting the meeting. Their work, support, contributions and warm welcome were instrumental to make this a successful, productive and enjoyable event.