After completing his Master of Medicine Degree in Ophthalmology, Dr Rono chose to be posted to the North Rift Region, which is considered a hardship zone in Kenya. He has served as the Zonal Eye Surgeon since 2006. The region covers, amongst other districts, Turkana which has so far registered the highest prevalence of trachoma in the country. The prevalence of active trachoma (TF) in Turkana County is 42.3% while that of potentially blinding Trachoma (TT) in adults >40 years is 9%. This is way above the WHO threshold of 10% and 1% respectively and therefore is a major public health problem in this region. At the time of posting, the Cataract Surgical Rate in this region was 100 cataracts per million population. This has significantly increased to 820 cataract surgeries per million population , within a period of 5 years. Patients seen and treated rose from 7,000 per year to over 19,500 annually over the same period. This , he attributes to team effort and the kind support received from partners, among them Sightsavers, Fred Hollows Foundation, Operation Eyesight Universal (OEU) and the Spanish Doctors among others.

Dr. Rono has excellent managerial skills, coordinating outreach programmes to remote areas in Kenya . He has overseen the renovations of various eye units in the region, with support from different partners. The construction of Kitale Eye unit was supported by Operation Eye Sight International. Kapenguria Satelite unit was constructed and equipped with support from the Seeing is Believing Initiative, Standard Chartered Bank , while the Lodwar Eye Unit was constructed and equipped with supported from the Spanish Eye Doctors. The Kitale eye unit , where Dr. Rono is based is the 2nd busiest eye unit in the county and often serves patients from the neighboring countries like Uganda and Sudan. His typical day begins at about 7.00 a.m with a phone call from or to the eye units within his zone to review the previous days work. He plans for the day with his team and proceeds to review patients who have undergone surgeries in the wards. Thereafter, he goes into theatre to conduct surgeries on patients who have been booked for that day. If he is going to the field for an outreach or a mobile clinic, his typical day would begin much earlier, at around 6.00 a.m. with travel to the field to begin his work. 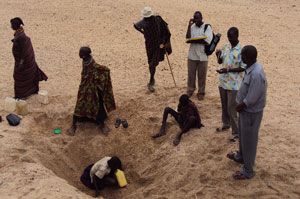 He has done a lot of work on trachoma programmes, participating in all trachoma surveys in Kenya, and coordinating trachoma prevalence surveys in the following areas:

Dr. Rono carried out research and wrote a thesis on the use of height as proxy to weight in dosing azythromycine among Kenyan children and developed a height stick which is now used in dosing azythromycine in Mass Distribution of Antibiotics. He co-authored the article in the British Journal of Ophthalmology entitled, "What is the appropriate age of participants for a survey to estimate the prevalence of trachomatous trichiasis (TT)". He has worked with programme and eye care staff in Kenya in reviewing data capture tools and subsequent development of the electronic eye health information system now used by eye care workers across Kenya. He is an excellent team leader, with enormous dedication to eye care work in his country.