With inputs from Prof Clare Gilbert, ICEH
Retinopathy of prematurity (ROP) is a potentially avoidable cause of irreversible, and usually total blindness in infants who are born premature. It is a major cause of blindness in children in middle-income countries and south-east Asia and has lifelong implications for the child and their family.
ROP was a major cause of blindness in the USA and Western Europe 50-60 years ago. This occurred because all preterm infants were given 100% oxygen whether they needed it or not. Oxygen is highly toxic to blood vessels, including those in the retina. After the role of oxygen was understood, and it was used less freely, blindness from ROP declined dramatically. Until very recently ROP was, therefore, seen as a condition of the west, and an iaterogenic problem that had been solved. ROP was not included in text books for nurses or paediatricians.
Over the last 10-15 years it has become clear that ROP is rearing its head again and is a major cause of blindness in children in middle-income countries in Latin America, Eastern Europe and the emerging economies of SE Asia (e.g. Vietnam). It is being increasingly reported in China and India. This is happening because these countries are expanding neonatal care, but do/did not know about ROP.
Control entails improving neonatal care, the delivery of oxygen in particular, and detecting infants who develop the treatable stages of disease, followed by laser to the peripheral retina. Both these aspects of control are effective at reducing blindness from ROP.

Blindness from ROP can be controlled through 2 broad approaches: 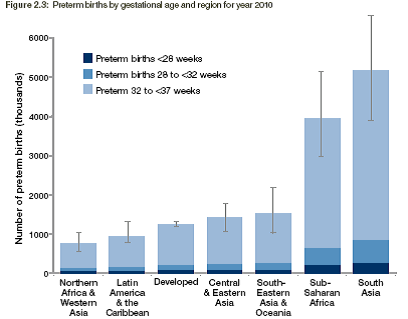 Challenge: infants can develop the stages needing treatment after they have been discharged. They need to be examined too. Any system of detection HAS to be able to respond to this situation as well.

​Infants with ROP have a massively increased risk of other pathology: high degrees of myopia; squint; cortical brain damage. They need regular follow up so these problems can be detected and managed.