‘The end game for blinding Trachoma’

Trachoma, one of the oldest infectious eye diseases, is the world’s leading cause of preventable blindness. Repeated infections of the conjunctivae with Chlamydia trachomatis can lead to trichiasis, corneal opacity and blindness. An estimated 325 million people live in at-risk areas. Trachoma blinds one person every 15 minutes. 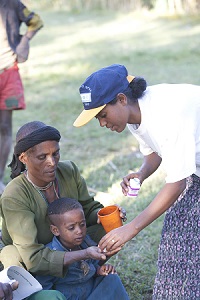 There is, however, a prevention and treatment strategy: the WHO-endorsed SAFE strategy that brings Surgery, Antibiotics, Facial cleanliness and Environmental improvement to communities where trachoma is found. To implement SAFE, national governments and non-governmental organizations are uniting like never before. In 2011, the International Coalition of Trachoma Control (ICTC) created a global strategic plan called 2020 INSight. Nine countries have already achieved elimination targets but more than 80 percent of the trachoma burden is concentrated in 14 countries, where immediate action is needed.

A major barrier has been the need to map and assess magnitude of the disease. In 2012, the British government funded the Global Trachoma Mapping Consortium so that millions of people in suspected endemic countries can be examined and targeted interventions can start.

Progress so far and work to be done

Follow this link for the Global Trachoma Mapping Project (GTMP) – implemented in 2012, it is the largest global mapping of infectious disease ever. It includes an interactive map built using data collected between 2012 and 2015 by specially trained health workers who examined people living in randomly selected communities.

See also the infographic below, courtesy of the International Trachoma Initiative (ITI). 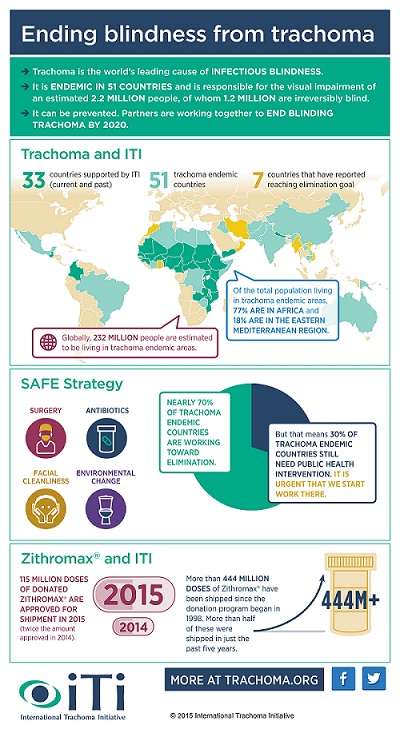