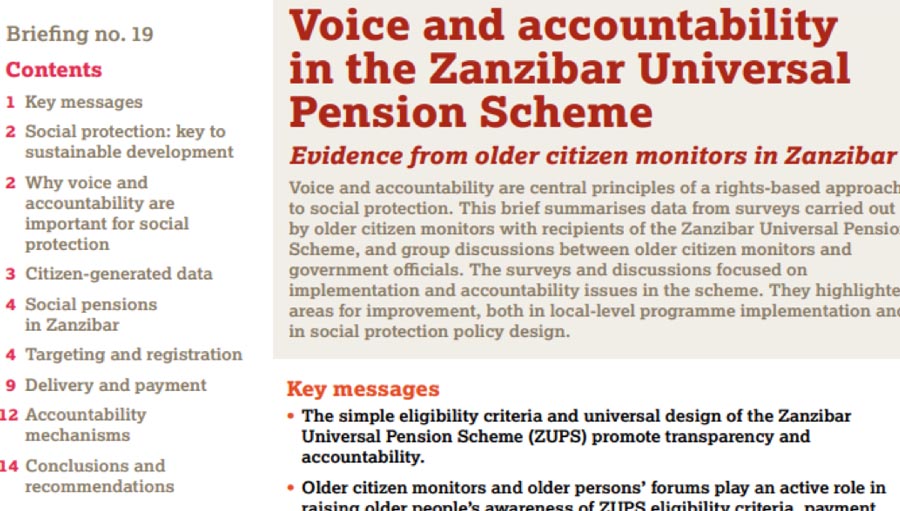 This is the executive summary of a report exploring how older people with disabilities’ rights and needs are widely overlooked in humanitarian responses. It highlights barriers they face in getting assistance and how these can be overcome.

The Zanzibar Universal Pension Scheme (ZUPS), launched by the Government of Zanzibar in April 2016, is the first of its kind in East Africa. It is a non-contributory, universal scheme for all people aged 70 years and above, and is fully funded by the government. It is administered by the Social Protection Unit of the Ministry responsible for older people.

The scheme was introduced primarily in response to weakening traditional support systems for older people. A decline in subsistence farming has resulted in many older people receiving inadequate support from family members. Many are unable to work or can only earn a very small income. The majority of older people do not have any other source of income, such as an earnings-related pension.6

Before the introduction of the ZUPS, Zanzibar had a system of poor relief for “destitute” older people. These were typically older people who were not only poor, but also in poor health, and who had no surviving children. The combination of conducive economic, social and political conditions, as well as this foundation of public responsibility, were important factors in the introduction of the ZUPS. 727,668 people aged 70 years and above currently receive a pension from ZUPS.

Inaugural Meeting of the ECSA-HC Experts Committee on Eye Health

Nursing Now: Campaign by WHO & International Council of Nurses