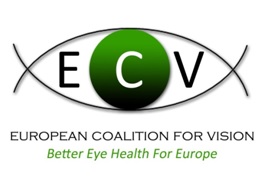 Luxemburg, 1st April 2014 – The European Coalition for Vision (ECV) (1) met today with the European Union (EU)’s Directorate General for Health and Consumers (DG SANCO) and EUROSTAT, the statistical office of the EU, to reiterate its call to European decision-makers to include eye health and vision in the European political agenda.

”Europe is facing an invisible epidemic, with an estimated 20.4 million people in the whole of Europe suffering from serious vision impairment – including 2.3 million who are blind. Without adequate action, these worrying numbers will only increase with the rise of diabetes and the aging population (4). Shamefully, two-thirds of these cases could actually be prevented or treated and are not,” said Bob Chappell , Past President of the European Council of Optometry and Optics.

“For way too long eye health and vision has been neglected. Brussels should make up for lost time. For starters, it could begin promoting more accessible eye care for all and providing improved and timely rehabilitation services – measures that would go a long way to improve the lives of those at risk of and those with vision impairment,”said Zoe Gray, Advocacy Manager for the International Agency for the Prevention of Blindness .

In its meeting with DG SANCO and EUROSTAT, the Coalition drew attention to the absence of official data on eye health and vision and ways to address it. “Data collection is crucial to better appreciate the magnitude of the issue we face, as well as to develop more efficient solutions to it,” said Jean-Felix Biosse Duplan, President of Vision Impact Institute. “Specific indicators should be coordinated and monitored by EU Member States so that EUROSTAT can deliver tangible, interlinked and clear data. This would also help assess results of public health policies to tackle eye health and vision impairment across Europe,” concluded Mr Biosse Duplan.

Zoe Gray, Advocacy Manager with the International Agency for the Prevention of Blindness (IAPB), at zgray@iapb.org or Tel.: +44 207 958 8254

(1) The European Coalition for Vision (ECV) is an alliance made up of professional bodies, patient groups, European NGOs, disabled people’s organisations and associations of health and medical suppliers. We exist to raise the profile of eye health and vision, help prevent avoidable visual impairment and secure an equal and inclusive society for those with irreversible blindness or low vision in Europe.

(4) The main causes of moderate or severe visual impairment in Western Europe are uncorrected refractive error (47.3%), cataract (13.8%) and macular degeneration (5.4%), which can affect people from childhood to old age. The main causes of blindness include macular degeneration (16.1%), cataract (13.8%), uncorrected refractive error (14%), Glaucoma (10.6%) and Diabetic Retinopathy (4.2%). Numbers at risk are expected to increase dramatically without significant health policy changes over the forthcoming years, mainly due to the ageing European population.