Principals can play a key role encouraging the sustainability of school-based visual acuity screening. From 2010 to 2013, Helen Keller International/Indonesia (HKI/Indonesia), with funding from Standard Chartered Bank, implemented a refractive screening program in junior high schools in the province of East Java in Indonesia.

Over the life of the project, HKI/Indonesia and the District Departments of Health trained 1,469 school health teachers who screened 109,172 students and teachers in their schools. The curriculum encouraged the trained teachers to screen the students in their every year, as new students continually enter the junior high schools year after year. 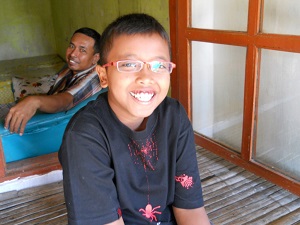 As part of future programming, HKI/Indonesia is using the data from these findings to advocate the principals to encourage their trained school health teachers to continue to conduct the visual acuity tests among students in the years following the training. School-based visual acuity screening of students provides an opportunity to identify refractive error early among children and principals can increase the sustainability of this approach in Indonesia by requesting their trained teachers to conduct the screens year after year.