Before Agnes Maiyo began working as an ophthalmic clinical officer/cataract surgeon at Iten District Hospital in 2008, the hospital didn’t offer any eye care services at all. When she returned from her training with the Kenya Medical Training College to take charge of eye care in Elgeyo-Marakwet County, the only diagnostic equipment she had was a torch pen. The hospital had run for 23 years without an eye care worker, which meant Agnes had to start from scratch.

Prior to her training, Agnes had worked as a clinical officer in the hospital’s outpatient department, and after her training she had no choice but to continue working from the same room, since the hospital didn’t have space dedicated to consulting with eye care patients. Adding to the challenge, the hospital management team didn’t prioritize eye care as a health issue.

Even though Agnes requested that her colleagues send patients with eye conditions to her, she didn’t receive many referrals. Having spent the last two years training to become an ophthalmic clinical officer and cataract surgeon, Agnes was disappointed to say the least.

“I wasn’t happy, and I was contemplating requesting to be transferred to another hospital with a functional eye clinic,” explains Agnes. “I felt underutilized and my training was becoming useless to me and to my community. I felt out of place.” 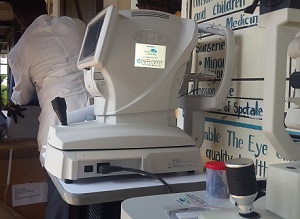 In 2011, things took a positive turn when Operation Eyesight Universal began supporting the delivery of quality eye care services in Elgeyo-Marakwet County. The hospital received its first diagnostic equipment, including an ophthalmoscope, retinoscope, trial box, slit lamp and operating microscope. Encouraged by this, the hospital set aside what was previously its injection room to serve as an eye unit. With support from SiB Phase III, the eye unit was expanded and renovated. By this time, Agnes was seeing an average of four patients per week. 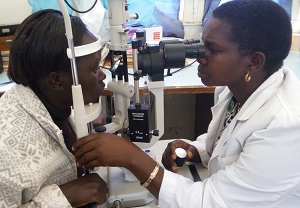 Previously, patients with eye conditions had to make the long, expensive trip to Moi Teaching and Referral Hospital in Eldoret, or they resorted to folk remedies. Most patients in need of eye surgery resigned themselves to a life of pain and visual impairment. As eye health awareness was created in the communities surrounding Iten, however, patient traffic to the eye unit began to increase. By the end of 2011, the eye unit had screened 5,205 patients and performed 110 cataract surgeries, both at the clinic and during outreach programmes in remote communities.

In the last eight years, under Agnes’ charge, 35,291 patients have been screened and 2,657 surgeries have been performed, of which 1,078 were cataract surgeries. Through her advocacy skills, Agnes has helped turn an indifferent hospital management team into an ally supporting her eye care work in ways she never thought possible.

“I also leveraged the external support from Operation Eyesight Universal and SiB to advocate for more support from the county government, which continues to support our service delivery by providing intraocular lenses and eye drops, and by helping facilitate outreach programmes,” says Agnes. 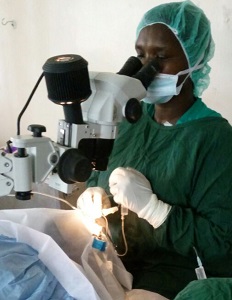 In 2013, sustained advocacy efforts led to the establishment of a satellite clinic in Chepkorio, 50 kilometers south of Iten. The county government plans to establish another satellite eye clinic in Kerio Valley. In response to the tremendous increase in the number of people seeking services at Iten Eye Unit, the county government has also allocated land at the hospital for the construction of a bigger eye unit and has invited partners to support the venture.

Agnes is pleased to see that the eye care situation in her county has improved. “I’m delighted with the progress we’ve made in improving access to eye care services,” she says. “People are getting their lost sight back and many more know that they can always count on our eye clinic to treat their eye conditions.” 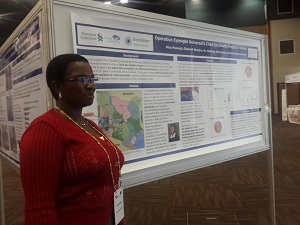 Agnes stands next to Operation Eyesight’s poster presentation at the IAPB’s 10th General Assembly in Durban, South Africa. Agnes was sponsored by SiB to attend the assembly, in recognition of her exemplary work in bringing eye care services to the people of Elgeyo-Marakwet County

Agnes is grateful for the support she’s received from Operation Eyesight Universal and SiB, which has allowed her to advance her career in ophthalmology and deliver quality eye care to those in need. “The future of my career is bright,” she says. “I can only see eye care growing in Elgeyo-Marakwet. Thank you!”