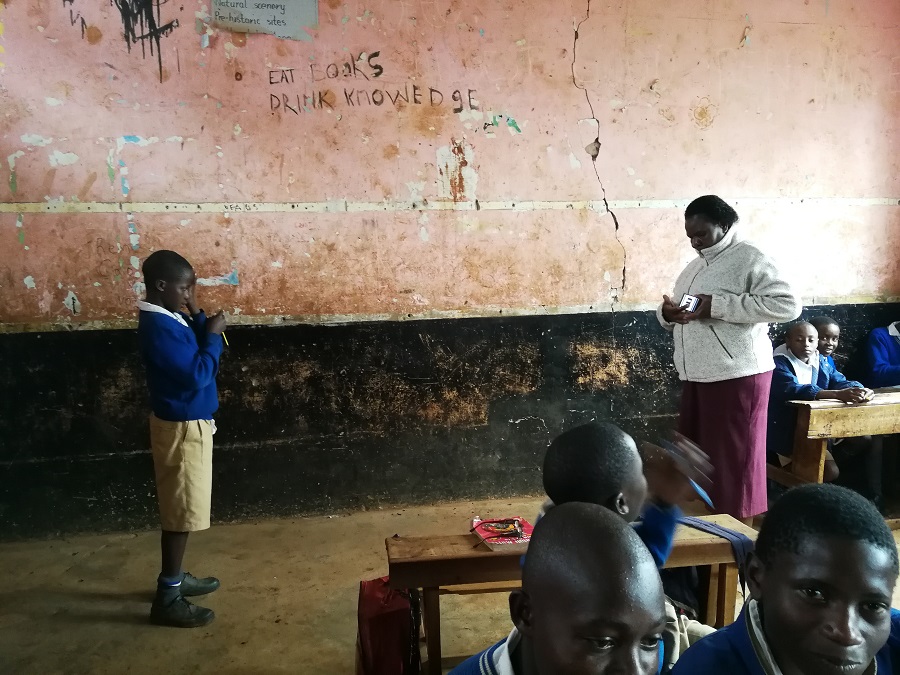 Meshack is screened by his teacher, using the Peek app.

Worldwide, 19 million children are visually impaired, with three quarters living in low-income countries. In Kenya, the prevalence of visual impairment among children ages 6 to 20 is 4.8% to 5.6%. If not detected and treated early, visual impairment affects a child’s academic performance and their entire quality of life. Fortunately, through projects like Peek, we’re able to screen students for eye problems and refer them for treatment as early as possible.

Peek is a smartphone-based application that allows users to conduct visual acuity tests using their mobile phones. It was developed by a team of innovators from the London School of Hygiene and Tropical Medicine, and with support from Seeing is Believing, we’ve brought the technology to schools across Kenya’s Trans-Nzoia County. We’ve trained teachers to use the Peek app to identify children with visual impairment. Those students then get referred to Kitale Eye Unit, one of Operation Eyesight’s partner hospitals, or a satellite clinic for necessary treatment.

After successfully piloting the project in 50 schools in 2014 and 2015, we launched a Peek scale-up project in January 2016. This three-year project supported the screening of 168,820 students, of which 6,696 students were identified with eye problems. Thanks to Peek, children like Meshack have brighter futures ahead of them.

Meshack is a 12-year-old boy who lives with his parents and five siblings in Matisi, a slum area in Trans-Nzoia County. He was born a healthy child, despite the many challenges his parents faced in raising six children on a meagre income. Meshack used to thrive in school, and his parents and teachers were thrilled with his performance. They even moved him up a class because he was advancing faster than his peers.

When Meshack reached class three, however, he started struggling with his schoolwork. Not only did his grades suffer, but he became more reserved, keeping to himself most of the time. Unfortunately, his teachers attributed his change in behavior to a lack of seriousness about his studies. Concerned, his parents tried buying him new textbooks and other reading materials, but it was all in vain.

“I also did not know what was going on in my life and lacked a better way of expressing or explaining to my parents or teachers,” said Meshack. For two years, Meshack struggled to keep his marks up, having to repeat a class due to his poor performance.

It wasn’t until a Peek screening team visited his school that he finally learned why he was having difficulty in school: he had eye problems. He was referred to Kitale Eye Unit, where he was examined and diagnosed with severe refractive error and allergic conjunctivitis.

Thanks to support from Seeing is Believing and Operation Eyesight’s donors, Meshack received the treatment he needed, including a pair of prescription eyeglasses. Today he can see clearly, and his grades and his self-esteem have improved. He also started participating in sports, topping Nationals in the 100m run.

Meshack can see clearly again with his new prescription eyeglasses.

Meshack and his parents are grateful to all the people and partners who went the extra mile to help him get back on track. “Thank you for helping me see clearly again!” says Meshack.

Of the 6,696 children identified with eye problems, 5,583 were treated, resulting in an 83% conversion rate. By holding eye camps close to schools, eye care services were more accessible, allowing the project to achieve this high conversion rate. To further increase access of services, two satellite clinics were established as triage centres and equipped with basic diagnostic equipment. This helped reduce Kitale County Referral Hospital’s workload, addressing a concern that had been identified during the pilot project.

Through advocacy meetings and strategic engagement of the county leadership, we’ve encouraged project ownership at the local level. The Trans-Nzoia County Government has also increased its allocation of resources for eye care drugs over the project period. It is evident that the Peek project is scalable beyond the county level up to the national level, and it will be instrumental in tackling childhood blindness in Kenya and beyond.