What is diabetic retinopathy?

Diabetes increases the risk of a range of eye diseases, but the main cause of blindness associated with diabetes is diabetic retinopathy (DR).

DR damages blood vessels inside the retina at the back of the eye. It commonly affects both eyes and can lead to vision loss if it is not treated. Poorly controlled blood sugars, high blood pressure and high cholesterol increase the risk of developing DR. 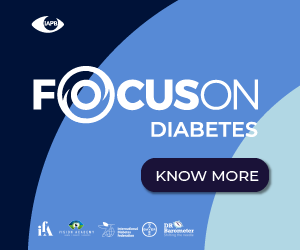 Increased urbanization, the consumption of less-nutritious foods, more sedentary lifestyles and resulting obesity have all contributed to the dramatic rise in the global prevalence of diabetes, particularly in resource-poor countries.

Over time, poor glycemic control can result in improper growth or blockage of blood vessels that nourish the retina and lead to leakage of blood, fluids and the formation of lipid deposits in the eye. In more advanced forms of DR, new abnormal vessel growth occurs due to reduced oxygen flow caused by damaged or blocked vessels. The resulting retinal scarring, retinal detachment, along with fluid build-up and swelling in the central part of the retina (the macula), lead to impaired vision. Damage to the retina is often irreversible in the later stages of the disease and results in blindness.

Every person living with diabetes is at risk of developing diabetic retinopathy (DR). Poorly controlled blood sugars, high blood pressure and high cholesterol increase the likelihood of vision loss due to DR, along with the risk of associated vision disorders such as cataract or glaucoma.

Approximately 1 in 3 people living with diabetes have some degree of diabetic retinopathy and 1 in 10 will develop a vision threatening form of the disease.

Because diabetic retinopathy is initially asymptomatic many people with diabetes are not aware that their condition, if left unmanaged it may affect their vision and lead to blindness. Most patients who develop diabetic retinopathy have no symptoms until the very late stages (by which time it may be too late for effective treatment). The Vision Loss Expert Group estimated that in 2020, 1 million people around the world were blind due to diabetic retinopathy, and over three million had moderate-severe vision impairment.

Low- and middle-income countries account for approximately 80% of the global diabetes burden yet many are ill equipped to properly identify, treat and manage the complex and varied consequences of this disease.

Efforts to reduce the prevalence of diabetes or to manage its health consequences more effectively are further undermined by the fact that approximately 50% of people with diabetes are currently undiagnosed.

People with diabetic retinopathy whose sight is at risk can be treated, most commonly with laser, to prevent visual impairment and blindness. However, there is no treatment that can restore vision that has already been lost.

Therefore screening and early intervention is critical. Targeting resources to the ‘front end’ of the service delivery system over time will help reduce the burden on tertiary services, which are expensive, resource- intensive and often simply unavailable.

As discussed in the Lancet Global Health Commission on Global Eye Health, screening for diabetic retinopathy depends on close partnership with general medical services to identify people with diabetes. Delivery of diabetic retinopathy screening is being transformed by increasing availability of lower-cost retinal cameras operated by non-specialists, acquiring images for remote grading.

In high-income countries, established diabetic retinopathy screening and treatment programmes deploy technicians to community settings to collect images for remote grading and referral decision. In the UK, for example, the proportion of blindness in the working-age population caused by DR has declined, due to both improved diabetes control and the national DR screening programme (Liew et al., 2014).

There is good evidence, however, that making appropriate lifestyle changes can contain or even reverse the most common form of the disease (Type 2 diabetes). The relevant lifestyle changes involve a sensible lower carbohydrate diet, increased exercise plus control of blood pressure, blood sugar and cholesterol. This is the main primary health care approach that can result in lowering the incidence and ultimately the prevalence of diabetes – but community buy-in is critically important.

Therefore, the most effective diabetic retinopathy programs will take a holistic approach, focusing on patient education, behaviour change, and effective disease management strategies in addition to the provision of annual vision exams and high quality, affordable treatment, when required. Increased cooperation between the diabetes care and ophthalmic communities is essential to preventing the impending epidemic of vision loss due to diabetic retinopathy.

Uncorrected refractive errors, which affect persons of all ages and ethnic groups, are the main cause of vision impairment.