In 2011 The Fred Hollows Foundation worked with a consortium of organisations to commission PricewaterhouseCoopers (PwC) to produce a series of reports looking at the costs and benefits of globally eliminating avoidable blindness.The other members of that original consortium were IAPB, Sightsavers, CBM, Operation Eyesight Universal and Light for the World.

On 2 May 2013, Australia’s Foreign Minister, Senator Bob Carr launched the landmark study into the cost and benefits of ending avoidable blindness throughout the world.
Some of the key points it notes are:
• Avoidable blindness occurs all over the world, but by far the greatest burden is carried by developing countries.
• In developing countries, an additional investment of only US$2.20 per capita per year for 10 years is required to eliminate avoidable blindness and visual impairment.
• In developing countries, the economic benefits of eliminating avoidable blindness and visual impairment outweigh the costs by a factor of four to one.
• That means that for every dollar invested in preventing someone from going blind, we generate more than four dollars in economic benefits.
• This large net benefit places eliminating avoidable blindness among the likes of primary school education and infrastructure projects in terms of its broader economic value.
The report represents an important partnership between PwC and The Fred Hollows Foundation – bringing together the expertise of two leading international bodies – from the private and not-for-profit sectors – providing a rigorous analysis of the cost and benefits of a major public health initiative: eliminating blindness.
Reports available at http://www.hollows.org/en-au/au/latest/investing-in-vision-the-costs-and-benefits-of-ending-avoidable-blindness 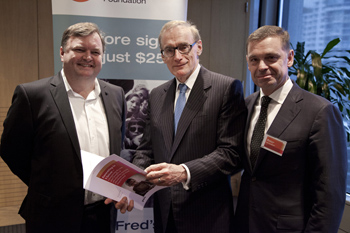