For World Glaucoma Week, Dakki Sherpa on glaucoma in Nepal… 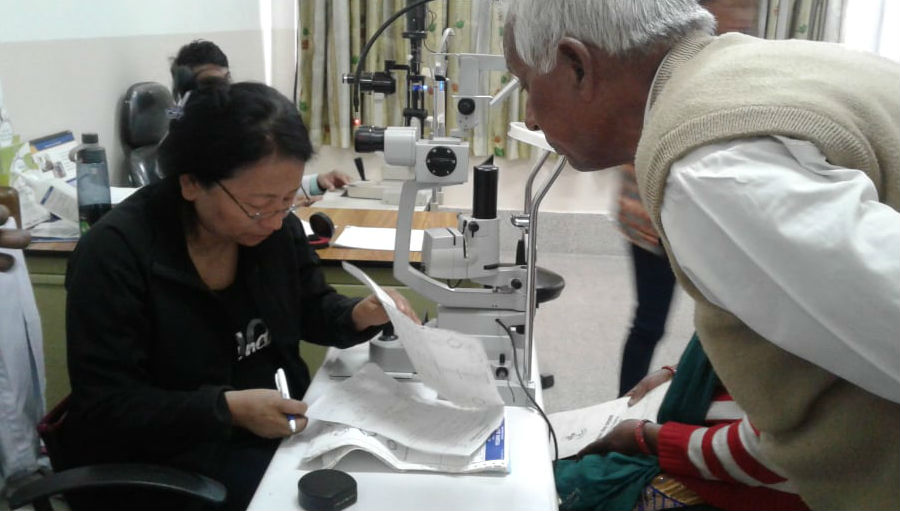 Glaucoma is the leading cause of global irreversible blindness.  According to Tham YC et al the number of people with glaucoma worldwide will increase to 111.8 million in 2040, disproportionally affecting people residing in Asia and Africa. Nepal falls in this category. Considering the difficulty in detecting the disease in early stages and the likelihood of irreversible loss, it is an important public health problem.

In Nepal, it is the third cause of blindness after cataract and corneal conditions, according to the national survey of 1981 (Brilliant, 1985).  An estimated 3.2 % of the total blindness in this country was reportedly due to glaucoma (1981).

The issues associated with it are:

The awareness of glaucoma is 2.3 % in the general population and is significantly lower in females according to a population based study (Thapa et al, 2011). Though the finding of this study cannot be generalised for the whole country, it does provide a reflection of the seriousness of the condition. The most common glaucoma seen in the out-patient department of a hospital in south-east Nepal is primary angle-closure glaucoma (Sarkar et al, 2010). Lens-induced glaucoma is the commonest variant among the secondary glaucoma cases (Sarkar et al, 2010; Sah et al, 2007; Paudyal et al, 2011).

According to a hospital-based study from a central hospital in Kathmandu, the glaucoma patients comprised of 0.74 % of 110,794 outpatients (Rijal, 2005). Another hospital-based study from the south-east part of Nepal concluded that approximately 25 % of the glaucoma patients were visually impaired or blind at the time of presentation (Sarkar et al, 2010). In another population-based study, the prevalence of glaucoma was found to be 0.938 % and that of primary open-angle glaucoma (POAG), primary angle closure glaucoma (PACG), secondary glaucoma and ocular hypertension was 0.562 %, 0.125 %, 0.250 % and 0.5 % respectively (Sah et al, 2007).

More population-based nation- wide studies with a uniform research design from various parts of the country are required for a more accurate estimation of the magnitude. A positive aspect in the battle against the disease is that there are more than 300 ophthalmologists in the country and the number is increasing annually. Residency, fellowship, optometrist and ophthalmic assistant training programme have expanded rapidly in Nepal which will strengthen our workforce. Leadership capabilities of glaucoma fellows in each province of Nepal has to be strengthened..

Further more, the availability of more than 20 relatively well-equipped eye hospitals and almost same number of eye departments of medical colleges in the country provide a strong infra-structure. However a few eye departments are not well- equipped in glaucoma diagnostic tools which has to be changed. The available data suggest that the prevalence of POAG is higher than ACG in the community. Obviously, a large proportion of POAG remains undetected until it is too late for effective treatment.

The situation at the community level, however, is alarming. This is particularly because of low awareness among the general public and the poor attention given to detection in community eye health programmes. Thapa et al (2008) have reported that a simple, age-based glaucoma-screening algorithm incorporated into the cataract-screening community clinics is successful in detecting glaucoma and providing treatment.

To conclude, the problem of glaucoma blindness in Nepal is challenging. We need to find an effective method and incorporate it in practice. To bring change, the Glaucoma society of Nepal was formed in 2019 and is affiliated to the World Glaucoma Association. Working with them could help us.


The Association of Caribbean Glaucoma Surgeons (ACGS): focusing the spotlight on glaucoma in the Caribbean


Education – as a blindness prevention tool for glaucoma