The SiB Shanghai project has come to its last year. Different from its hard beginning, the last phase of the project runs smoothly and came up with significant achievements, which we believe to be the result of effective monitoring by the project leaders. From the launch day of the project, our team has been committed to solve problems and optimize processes.

By spending a lot of our efforts on data collection, recording, monitoring, investigation, and analysis, we could identify the breakthrough points which allow us to improve the implementation strategies as well as project outcomes significantly. 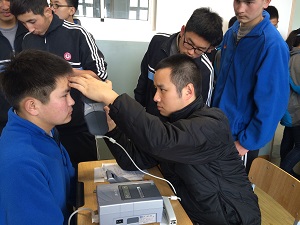 One big component of the project the RE service to students. For all the kids we screened at schools and those we have subsidized with glasses, we recorded their name, age, school, vision test result, and family phone number.

Since 2013, we have been randomly selecting kids to reach to understand their satisfaction with the service provided by branch-center outreach team and to follow-up their service uptake rate upon the screening.

Based on our findings, we adopted some new strategies to improve our services:

1. We accelerated glasses distribution after school screening and opened ‘SiB fast channel’ at Shanghai EENT Hospital’s outpatient department for kids came for further examination after being identified with vision problem.

2. We provided subsidization to kids when they buy their first glasses rather than distributing the real glasses. Subsidization gives a lot of flexibility and such strategy makes much differences because:

According to the most recent survey, both service satisfaction rate and glasses uptake rate have hit 90%.