Zamfara State has an estimated 320,000 persons who are blind and a traditional cataract extraction practice, known as couching, is prevalent. The State faced a severe shortage of trained eye health workers, including Ophthalmologists, and infrastructure dedicated to eye care services was weak or non-existent.

Sightsavers advocated to the government to employ Ophthalmologists and as a result four were employed and Sightsavers provided the necessary equipment and consumables to support cataract surgeries. User fees were generated from the surgeries and were channelled back into the project to contribute to the training fees of the four state Doctors in Ophthalmology. The project supported government health structures by providing additional human resources and strengthened existing infrastructure. Once fully trained, the new Ophthalmologists were supported to provide services to the wider populace. 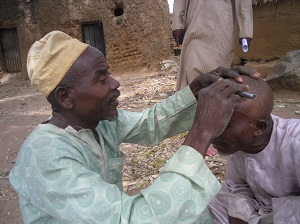 Through the Seeing is Believing initiative, much needed support was provided to ensure capacity building of staff, refurbishment of two government facilities and provision of specialist equipment. The State Governor’s wife attended the official opening of one of the eye units which helped to raise the profile of the project and attract patients. Currently, the State Government is constructing a 20-bed facility for the unit and has provided a 50KVA generator.

The project has also benefitted from the placement of employed optometrists and the development of two additional eye units, funded independently by the State Government. These centres are now providing sustained eye health services to the local community. The Government is integrating eye health into the state primary eye health system which is ensuring services are accessible to a large percentage of the population. The existing eye health facilities are located within easy access to the surrounding communities and can be reached within one hour if travelling by road.

The state eye care programme currently has a motivated workforce that is integrated into the health system. The project has undertaken continued advocacy with the State Government and the project is benefitting from a high level of political support which will help to sustain services in the future.