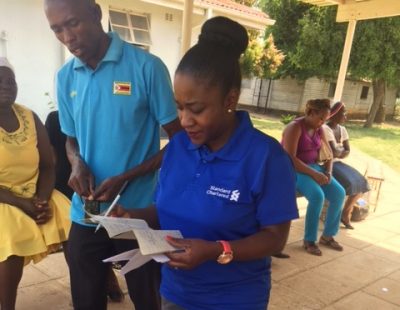 Background: The ‘Seeing is Believing’ (SiB) project in Zimbabwe has been co-funded by Standard Chartered Bank (SCB) and Christian Blind Mission (CBM) since 2015 and continues to be implemented in North East Zimbabwe by Council for the Blind (CfB), a local NGO, in partnership with the Ministry of Health and Child Care (MoHCC). Besides the profound impact the project has made towards Zimbabwe’s National Eye Health Strategy (NEHS) 2014-2018; ‘SiB’ has also made positive contributions towards Vision 2020 (V2020), a global initiative that aims to eliminate avoidable blindness by the year 2020. The project supports three (3) eye units; one at tertiary (national) level and the other two (2) at the secondary (provincial) level of the Zimbabwean Primary Health Care (PHC) structure. The project aims to increase the quantity and improve the quality of eye care services for adults and children by increasing the capacity of the eye-health workforce at primary, secondary and tertiary levels. Of equal importance is the project’s focus towards improving the infrastructure for eye-care delivery at tertiary and secondary levels and ensuring all eye-care services are inclusive.

The Initiative: As part of the bank’s corporate social responsibility, SCB staff were keen to participate in the project by offering their time on a voluntary basis. Keith Goremucheche, the bank’s Volunteering and Training Coordinator approached CBM to see if it would be feasible to train SCB staff in a skill which could be used to help beneficiaries of the ‘SiB’ project. In June 2017 with the help of ophthalmic nurses (OPNs) from Norton Eye Unit (a secondary level unit supported by the ‘SiB’ project in Mashonaland West Province, Zimbabwe), SCB staff were trained in Visual Acuity (VA) testing at the Standard Chartered Bank Sports Club in Harare. Over 60 volunteers were trained and they were keen to use these skills to participate in the project by gaining a meaningful understanding of the work being done on the ground. Dr. Ute Dibb, the Ophthalmologist in charge of Norton Eye unit had observed the SCB staff training in June and subsequently extended an invitation to the volunteers to put their skills to use at the unit. Dr. Dibb feels that this initiative presents an “opportunity for the donor to get down to the grassroots level” and interact with the project’s beneficiaries; a rare occasion for most corporates who often donate money and materials and not time.

SCB staff began volunteering at Norton Eye Unit in September 2017 on a weekly basis during the unit’s clinic days (Monday, Wednesday and Friday) to put their acquired skills from the VA training into practice.

The experience: A period of three months had lapsed between the staff training and the first volunteering at Norton. As such there was need for a quick refresher training upon arrival at the unit. The volunteers confirmed that the initial training adequately prepared them for the work they were expected to do. The OPNs interviewed concurred with this and actually commented that they had to do very little work in terms of reorienting the volunteers. SCB staff spent the whole morning at the unit (from 8am to 1pm) working directly with patients and OPNs. SCB staff were able to administer VA tests to the patients before they saw the nurses. The patients had full confidence in the volunteers as they were introduced by the eye unit’s personnel (OPNs) before they started interacting with the patients. Besides VA testing, SCB volunteers helped in escorting patients around the various departments for their eye tests, especially those patients who were visually impaired. This was highlighted especially by the OPNs interviewed at Norton that the volunteers were extremely helpful and able to work in the different departments as needed. The staff who were also all literate in basic computer skills were able to capture data for the OPNs and help in administrative tasks. OPNs in Norton were happy with the flexibility of the SCB volunteers to do different tasks as required.

The interviewed volunteers all had positive feedback about the unit and the experience of the OPNs working there. They were appreciative of the opportunity to be on the ground and gain new skills while interacting with the beneficiaries of this life-changing project. It would appear the volunteers faced no challenges and they were all keen to go back to the unit to volunteer again as well as encouraging other colleagues to do the same. Due to the number of staff trained the volunteers have only visited the unit once so as to give all trained staff the opportunity to experience the unit. Highlights from the overall experience included developing skills which could be used in their everyday life e.g. patience acquired from working with patients, multi-tasking, working under pressure and basic knowledge about eye care which they could share with others in their communities outside of Norton. The gratitude expressed by the patients especially those who through refraction, surgery or medication had their sight restored was especially rewarding for the volunteers who felt honoured to be part of making that difference in the patient’s life even in a small way. The OPNs commented that the volunteers’ conduct with the patients was professional as well as compassionate, and that due to this experience they would recommend other eye units to develop a similar model of working with trained volunteers during clinic days.

One volunteer was pleasantly surprised by how literate the nation is as she describes seeing patients as old as 80 years being able to identify different letters on the VA charts. The facility in itself was highly praised by the volunteers who could appreciate the obvious work put into the refurbishment of the unit with patients coming from all corners of the country and even regionally from places like Mozambique to seek services at the unit. The OPNs were described as ‘having a good heart’ and being experienced in their work. The OPNs felt that if the volunteers had an opportunity to return again they would be better able to hone in their skills. This sentiment was echoed by Keith from SCB who said that once all trained volunteers had been to the unit the cycle could start again; and that this initiative will carry on as long as the SiB project is being implemented in Zimbabwe. Norton eye unit is one of the busiest eye units in the country and an additional hand will always be greatly valued by the staff whose workload will be lightened and patients whose time in the queue will be shortened.

“One of the best feelings one can have is being part of an event that manages to put a smile on someone’s face… that manages to change someone’s life” – Keith Goremucheche – Volunteer and Training Coordinator, Standard Chartered Bank

The staff volunteering programme was the brainchild of Keith who has always had a passion for community outreach and was looking for a way to combine this passion with his work.

“We were taken through each and every stage of the testing and what we should expect on-site… It was a humbling and eye-opening experience… the nurses at the unit were very helpful and made sure we understood before we started…” Vimbai Mupanda – Client Service Manager, Standard Chartered Bank.

Vimbai expressed passionately that this initiative should go beyond corporate volunteers and be opened up to the public; involving especially women, who are more likely to pass on lessons learnt to their families.