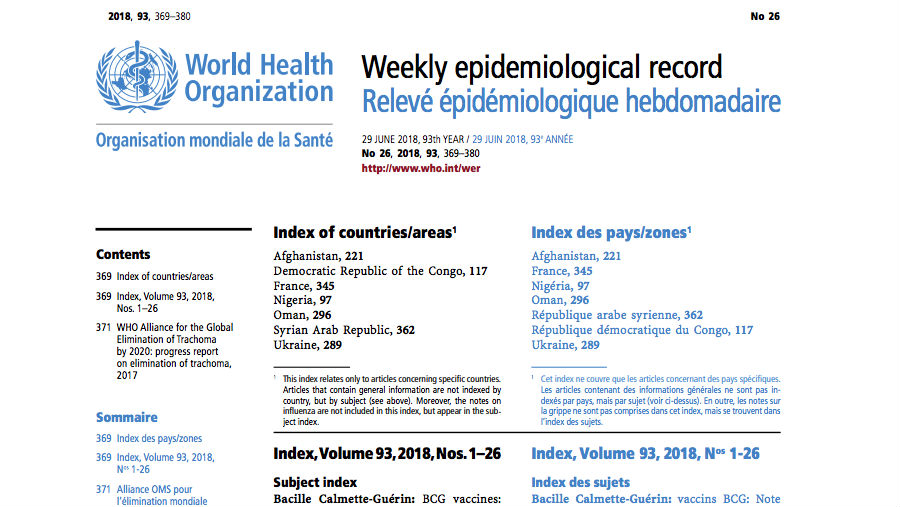 The number of people at risk from trachoma, the world’s leading infectious cause of blindness, has reduced from 190.2 million in 2016 to 157.7 million in April 2018, the World Health Organization (WHO) has reported in its Weekly Epidemiological Record (WER).

The progress update presents 2017 data on the implementation of the SAFE strategy (surgery, antibiotics, facial cleanliness, environmental improvements) in trachoma-endemic countries as well as summaries based on district-level prevalence estimates held in the GET2020 database as of 17 April 2018.

Since the last Weekly Epidemiological Record including trachoma progress (2014 – 2016) published in June 2017, four countries – Lao People’s Democratic Republic, Cambodia, Nepal and Ghana – have been officially validated for eliminating trachoma as a public health problem. Five other countries – China, Gambia, Iraq, Islamic Republic of Iran and Myanmar – have reported achievement of the prevalence targets for elimination.

The record shows that ministries of health are continuing to achieve historically high levels of surgeries and delivery of antibiotics. In 2017, 83.5 million people received antibiotics to treat trachoma infection. 2017 also saw 231,447 surgeries conducted to treat trachomatous trichiasis, the late blinding stage of trachoma.

“The record continues to show that the SAFE strategy works when it is implemented comprehensively and at scale”, said Serge Resnikoff, Chair of the International Coalition for Trachoma Control. “We must continue to advocate for mapping in areas where the disease prevalence is uncertain and target more resources to populations that are hard to reach. This year’s mass drug administration for trachoma in Yemen proved that the most vulnerable populations can be reached when partners use their expertise and resources strategically.”

PacEyes – Another Successful Conference in Suva