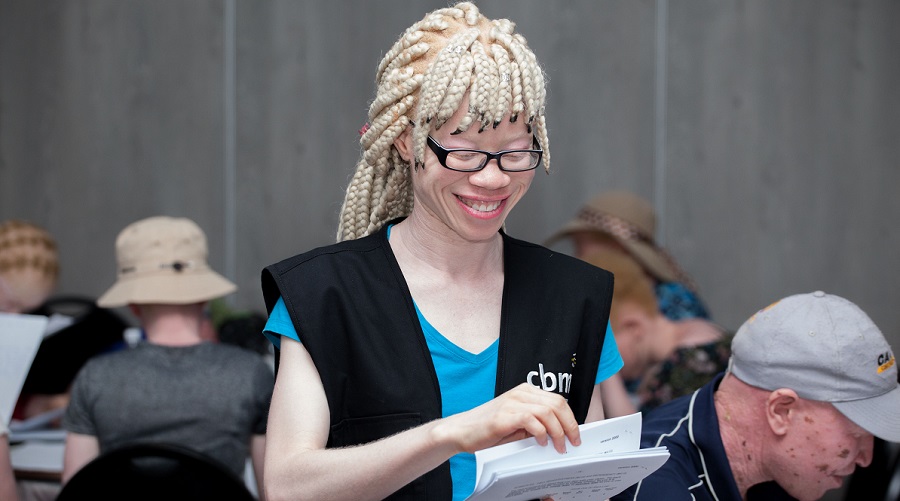 Albinism in Africa and indeed in Zimbabwe; is a condition that is widely misunderstood which therefore results in discrimination of people with albinism. In most cases discrimination starts at family level which usually causes a child to underperform due to not believing in themselves or low self-esteem. Another common scenario is the divorcing or separating of parents after a child with albinism is born mostly due to pressure the family who believe albinism is a curse or evidence of infidelity. As a result of the divorce children with albinism are then raised by a single mother and with the general poor economic situation in the country the child may not be able to make it to school due to poverty which make the parent unable to afford school fees, low vision devices and sunscreen.

In Zimbabwe we currently have an unemployment rate of 90% and even with lobbying the government and private sector to give priority to people with albinism it is difficult for them to apply for jobs because of the level of education which in most cases is below minimal.  They also lack resources to enroll at vocational institutions to acquire vocational skills.  This therefore creates a never ending circle of poverty. People with albinism have different degrees of visual impairment therefore their performance in school without assistive devices might be very poor and in the project we have had reports of young people who dropped out of school because they could not manage being labelled failure even though they knew their only challenge was in seeing properly. In some cases, if there are other children without albinism in the family and limited funds parents might prioritize those with better performance and its usually never a child with albinism.

Some of the young people with albinism grew up without much knowledge of the condition hence they were not aware of service providers who could assist them.  Others were told that they simply cannot do anything in life and had given up on dreams such as driving and through project activities like career guidance role models with albinism were able to share their inspiring life stories.  Most young people have determined that before the end of the project they must be drivers, while some who were supported to a vocational school decided to attend evening classes so they can write their Ordinary Level exams in November.

SiB through CBM in partnership with Council for the Blind and Zimbabwe Albino Association in Zimbabwe is currently influencing and empowering the lives of 52 young people between the ages of 18 to 35 both males and females with albinism, through a mix of self-empowering initiatives and service provision. The project has been building confidence and self-belief for young people with albinism through facilitating self-esteem building sessions, career guidance, networking platforms and collaboration among peers. In addition; the project has so far provided   low vision assistive devices to 52 young people to improve their vision; the youth empowerment activities which the project has supported in the form of soft skills training in business management, small livestock production; have been popular among the youth with albinism and are a catalyst that is expected to improve the employability of youths with albinism.

In the project Council for the Blind is working with the Ministry of Health through the Memorandum of Understanding with Parirenyatwa Group of Hospitals and we have seen an enlightment of doctors who interacted with and assessed youths with albinism.  There is an improved understanding of albinism and they were more comfortable around the youths with albinism by the end of the assessments. We are hoping to achieve advocacy through demonstrating a batch of 52 youths owning and successfully running their small businesses, employed, educated and able to speak confidently about their lives and their rights