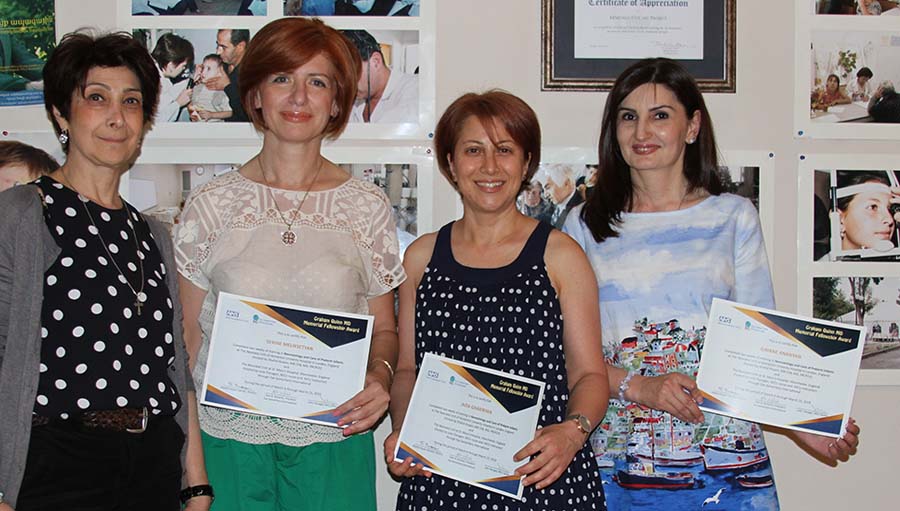 All participants spent the first week, March 4-8, 2019, at the neonatal unit (NICU) at St. Mary’s Hospital in Manchester, England under the direction of NICU nurse instructor Julie Flanagan RN. During the second week (March 11-15) they observed the NICU Homerton University Hospital NICU in London, England, under the tutelage of Shad Hussain MD, neonatologist.

“Everything that I have seen and heard was beneficial, especially the program[me] of Practice Development Nurses in England and neurodevelopmental follow-up of pre-term babies (Alberta infant motor scale) and care approach for extremely preterm babies”, said Serine Meliksetyan, one of the Fellows who benefited from this fellowship grant.

“I have already created a presentation about neonatal care in Manchester and London, for our obstetricians and neonatologists in Armenia. After a detailed review of the information, which was kindly provided to us, I am going to share all of the useful information and practical skills, that I received during these two weeks”, said Aida Gharibyan, another Fellow.

Funds for the fellowship were provided by Graham Quinn MD from the Children’s Hospital of Philadelphia. Dr. Quinn was instrumental in the initial classification and treatment guidelines developed by the International Committee on Retinopathy of Prematurity (1984-87, revisited in 2005). He was also a key member of the  ET-ROP study (2000-2002) which provides the present treatment guidelines for ROP throughout the world. In addition, he has led and participated in ROP workshops around the world.

Armenian neonatologists have had very little contact with advanced NICU care, and many new techniques and insights were learned to take back to NICUs in the capital of Armenia, Yerevan. The participants highlighted the newly discovered information gained from their experience:

“I learned so much from observing the NICU long-line procedure, local guidelines, infection control in unit and care approach for extremely preterm babies”, said Gayane Ananyan.

Each participant expressed their profound gratitude to Graham Quinn MD for this important neonatology fellowship,  which will have a significant impact upon NICU care in Armenia for years to come.