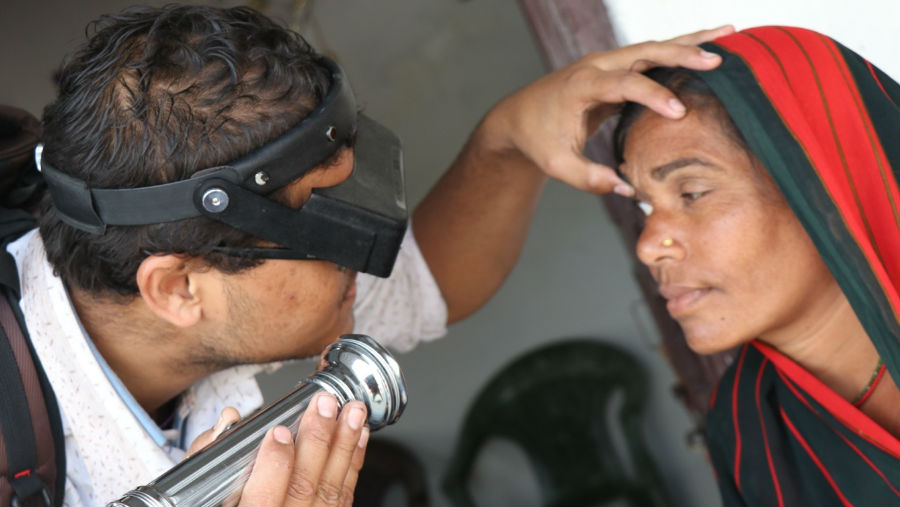 Trachoma, a chronic conjunctivitis caused by repeated episodes of Chlamydia trachomatis, is still the leading infectious cause of blindness worldwide. The World Health Organization (WHO) recommends a multi-faceted strategy, the SAFE strategy, for trachoma control (SAFE is Surgery for trichiasis, Antibiotics to reduce infection, Facial hygiene, and Environmental change for sustainable interruption of transmission). Country programmes are encouraged to map suspected trachoma endemic districts to determine the prevalence of follicular trachoma (TF) and trichiasis (TT), and institute SAFE where trachoma is more than 5% in children ages 1–9 years and TT is 1/1,000 total population or more. The goals are sustainable reduction in prevalence of TF in children ages 1–9 years of <5%, and the reduction of TT to less than 1/1,000 of the population. After 3–5 years of SAFE implementation, impact assessments are carried out to determine progress, and if the impact assessments show achievement of goals, then vertical programme activities, particularly around mass treatment with antibiotics, can cease. However, to ensure longer term, sustainable achievement of goals, post-MDA surveillance in formerly endemic districts should be carried out.

In Nepal, trachoma was the second leading cause of preventable blindness and was endemic in many areas of the country where prevalence rates were as high as 23% in several districts. (Source: 1981 Epidemiological Survey of Eye in Nepal). The Nepal Netra Jyoti Sangh (NNJS), Nepal’s apex-body for eye health, has been running 18 eye hospitals, 80 eye care centres and 38 district branches to successfully reduce trachoma prevalence in endemic areas through the implementation of a community-based trachoma control programme. While progress was made in disease reduction, there was still a tremendous amount of work to be accomplished. To this end, NNJS and the ministry of Health (MoH), with support from International Trachoma Initiative (ITI), initiated the “National Trachoma Program (NTP)” in 2002 with the goal to eliminate trachoma from Nepal. Later, the NTD integrated programme of RTI/ENVISION (supported by USAID) also came on board to support NTP. NNJS/NTP mobilised district-based eye hospital staff to conduct district-level trachoma rapid assessments (TRA) and baseline, impact, and pre-validation surveillance surveys for trachoma. Survey activities were directly supervised and monitored by NNJS/NTP. Prevalence data from surveys were used to make programmatic decisions on implementation of the SAFE strategy in accordance with WHO guidelines.

Initially, the trachoma programme was established as a vertical programme within the Nepal Netra Jyoti Sangh. However, with the necessity to expand the programme in all trachoma endemic districts and with the recommendation from programme evaluators, the programme adopted an integrated approach in 2005. NNJS was responsible for the surgical component of the SAFE strategy; MoH structures were used to conduct Zithromax® mass drug administration (MDA) with support from ITI and RTI/ENVISION; and facial cleanliness and environmental improvement activities were carried out by the NNJS/NTP, Ministry of Education (MoE) and the Department of Water Supply and Sanitation.

NNJS/NTP followed WHO guidelines to determine the prevalence of active trachoma and TT in the districts. The first step was to collect district information regarding trachoma, hygiene and sanitation, and water access. Based on this information, a population-based, 20 clusters survey was conducted. The findings of this baseline survey was the basis for programme intervention. A WHO recommended survey protocol was followed to obtain 20 cluster sites randomly for the survey.

After the population-based survey, the NNJS/NTP programme identified 20 trachoma endemic districts out of Nepal’s 75 districts. The full SAFE strategy was implemented in 19 districts in which the baseline prevalence of TF in 1–9-year-olds was greater than 10 percent (Kailali, Kanchanpur, Chitwan, Nawalparasi, Banke, Bardiya, Surkhet, Dailekh, Rolpa, Doti, Achham, Bara, Parsa, Sarlahi, Rasuwa, Rukum, Dang, Kapilvastu and Rautahat). In one additional district (Baitadi) the baseline TF prevalence was 4.5%. However, several clusters within the district had proportions of children 1-9 years with TF >10%. Impact and pre-validation surveys conducted between 2014 and 2017 show the targets for elimination of trachoma as a public health problem have been met in all 20 endemic districts.

This is great news and a big cause for celebration for Nepal and the national trachoma programme. However, there is work to be done. The Nepal Netra Jyoti Sangh, with the support from Ministry of Health, is in the process of formulating an action plan for post-validation trachoma surveillance in order to not let trachoma re-emerge again in any district in Nepal.

Nepal is justifiably proud of the National Trachoma Program, which has accomplished its target to eliminate trachoma as a public health problem from Nepal.